Iris Dunleavy is the wife of a souther plantation owner. She is duped into the belief that her husband’s slave labor would be temporary, a “necessary evil”. However, she is a vociferous and recalcitrant partner in the marriage, an image contrary to proper behavior in Southern society. When she witnesses the brutal treatment of a young slave, she is unable to stand the torture. She throws herself in front of the bloodied youth to prevent further lashes of the whip. This does not bode well with her husband and he reprimands her. Later, when she helps a group of slaves to escape, her husband is infuriated and convinces a Virginia judge to declare her insane. She is sent to Sanibel Asylum, to be rehabilitated into a more compliant wife, cooperative and gentile.

While there, she meets many patients, some insane others questionable. Her friendship with her doctor’s son is sweet and helps her to manage the long days. Iris knows she does not belong at Sanibel and refuses to cooperate. and provides a constant challenge to her doctor and staff. Considered a modern, state of the art facility, Iris is not convinced. When she suffers an inhumane water therapy treatment given to uncontrollable patients she seethes with anger.While there she meets a Civil War soldier who suffers flashbacks and fits that are only soothed by the color blue. Iris falls in love with Ambrose and begins to think about a different future.

Kathy Hepinstall is brilliant with characterization and her novel offers a memorable cast. My favorite person is an older woman inmate who suffers from an unusual eating disorder. While this novel is intensely serious and provides a setting that is the dark reality common at institutions of this time period, Hepinstall manages to relieve the readers with short respites of humor. Without giving away too much, a much anticipated meal of lamb becomes a disappointment to all, except the doctor’s son. Hysterical moment with hysteria at Sanibel.

This was my first experience reading anything by Kathy Hepinstall, however after reading Blue Asylum I will have to catch up. She certainly captured my interest as Blue Asylum kept my Kindle in constant use. Anyone interested in the rights of women, and the social inequities that was prevalent during the late 19th century will embrace this with zeal. Kathy Hepinstall has a fluid style, a natural cadence to her writing with an intriguing plot.
Fabulous historical fiction that will satisfy anyone interested in the social reform movement of this time period and the freedom and rights of all. A novel deserving much praise.

Disclosure: This kindle edition was made available at no charge to me via Net Galley at www.netgalley.com 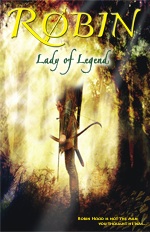 ROBIN: LADY OF LEGEND, (The Untold Adventures of the Girl Who Became Robin Hood)

Fabulous, fabulous, fabulous retell of the classic story Robin Hood, but this time the role of Robin Hood is a girl. Robin is the recalcitrant, headstrong daughter of Lord Robert of Locksley.  She has no recollection of a warm loving father.  She has little contact with him, he is distant and reclusive, preferring to ignore his two daughters.  Then one day she is summoned to meet with her father. With cautious trepidation she arrives in his study.
He begins by stating the obvious, that it is her birthday. However, he is unable to recall that she is eighteen, not seventeen, and Robin politely corrects him. Without delay her father announces he has a surprise for her that he will reveal at her birthday feast. During the celebration she accepts a dance with a man who introduces himself as Phillip. He roughly pulls her close with arrogance and Robin is revolted by his acrid breath and demeanor. Once the music stops, Robin is further repelled when he kisses her on the lips. Some time later, her father announces her birthday surprise. It is the engagement of his daughter Robin to Phillip Darniel, the Sherriff of Nottingham. Robin is loath to accept Phillip, and is shocked with disbelief.
It is this situation that leads to her plan.  She will never agree to this marriage. With skill, determination and cunning Robin of Locksley, expert archer, transforms herself into a young boy.
R.M. ArceJaeger crafts the retelling of the classic Robin Hood of Sherwood Forest with the substitution of Robin, a women heroine.   She honors the classic by keeping the original characters, but the adventures are more complicated with a woman leading her band of outlaws.  I for one am delighted that this Robin gives young girls a role model that isn't dressed as the beautiful helpless princess. The story is most suitable for YA audiences and adults due to some mature content. Place is easily envisioned with the author's ability to capture mood and setting with precise descriptive prose.
Honestly, I couldn't put my Kindle down. I read this one in one afternoon at lightening speed. ROBIN LADY OF LEGEND will captivate readers with start to finish action adventure that certainly complements the original.
Disclaimer: A Kindle Edition of this book was sent digitally for my review. This review is my honest opinion without bias for any reason.
Reference Links: http://rmarcejaeger.com

Read Across America Day at School