Smile it is a Sunday Rain 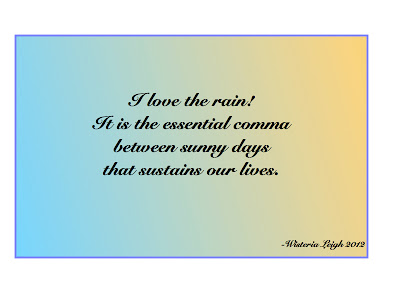 Email ThisBlogThis!Share to TwitterShare to FacebookShare to Pinterest
Labels: quotes by Wisteria


Sang Ly, a twenty-nine year old young mother, her husband Ki Lim and son, Nisay live on the top of a large mountain in Cambodia.  Rather than pristine rolling landscapes and crystal clean running streams, they are surrounded by piles of noxious and dangerous garbage. They live at the very bottom of Maslow’s Hierarchy.  The place is called Stung Meanchey, and this is their home, a shelter that consists of a couple of poles and a canvas roof.  Within are the bare essentials for survival.  Each day is spent with one goal in mind, to make enough money to eat a dinner.  Hopefully, with luck they will earn enough at the end of the month to pay rent to The Rent Collector,  a merciless, stone hearted drunk.  They call her the cow, but her name is Sopeap Sin. Nisay is a very sick child and all attempts to treat his chronic diarrhea fail. His belly is large and Sang Ly fears for his life.  One day when Sopeap arrives for the monthly rent, Sang Ly witnesses her sobbing after she discovers a torn children’s picture book in Nisay’s hands. Later, Sang Ly is sure that Sopeap must know how to read. How is it possible, that this wretched woman, also amid such poverty is able to read?  Sang Ly is determined to save her son and she now knows that there is a way.

This is an amazing  story of challenges, determination, guilt, gratitude and forgiveness. Seriously, a book that is difficult to break away from. Sang Ly and Sopeap Sin discover through their love of storytelling lessons that will surprise everyone.  I will savor this book, the characters, the message and my personal thoughts about life’s perspective. THE RENT COLLECTOR is a passionately rare and memorable gift for all readers.

© [Wisteria Leigh] and [Bookworm's Dinner], [2008-2012].
DISCLOSURE:  A free kindle version of this book was made available by Net Galley for review.

Having read all of Michelle Moran’s novels, the allure of The Second Empress, her latest historical fiction work about Napoleon’s Court was an irresistible pick from my TBR pile.  I chose wisely and for a few hours I became French with a bit of Austrian thrown in. Much has been written about the Bonaparte family including thousands of letters that the author notes she examined in order to shape her vision of Napoleon and other family members, Pauline, his sister, and Josephine his first wife.  She does not apologize for the harsh treatment and depiction of the lewd, often cruel and ever unpredictable tyrannical despot Napoleon Bonaparte.  Marie-Louise, the eighteen year old daughter of the king of Austria faced an impossible decision. A decision she felt gave her no choice but to leave Austria to marry Napoleon who was at age forty, desperate for an heir. After fourteen years, of marriage his first wife, Josephine, was still barren so when her infidelity was exposed,  he had her banished from court.  Marie-Louise had nothing to fear from Josephine, but Napoleon’s promiscuous narcissistic exceedingly beautiful sister Pauline had dreams of her own. She would like nothing better than to model a reign with her perverse brother, together an incestuous pair, who would rule an empire in the style of ancient Egypt. When Marie Louise gives birth, Pauline must alter her course, and her idiosyncratic behavior increases.  At the same time,  Napoleon’s Machiavellian personality is not satiated and his military compulsion to conquer all results in a bloody defeat. When the future of France turns bleak, Marie-Louise now given the position of regent of France by her husband, must make an audacious and clever decision.

The Second Empress will delight the most devoted of Moran’s fans with an engaging plot and glimpse of history during Napoleon’s time. This highly recommended novel is another distinctive and spicy portrayal of powerful women who were destined to change history.


DISCLOSURE: A copy of this book was sent at no charge to the reviewer for an unbiased candid review.