Ask any greyhound owner to talk about their rescued greyhound and they will all have remarkable stories to share. When you take an athletic racer off the track to live in your home, you might expect that they need a lot of exercise. Not true. These former race dogs would prefer the couch and a couple of walks a day.  Proceed with caution....you'll have to hold on to the leash tight- especially when they see something of interest: moving car, squirrel, bird, plastic bag. I have a fenced 6' pen for those times when the chill in the air turns a midnight walk into a nightmare.

I do confess they all have coats and pajamas or cozy blankets.  It's not to be cute really, they no fat layer and are all muscle with a very thin skin and short hair. Greyhounds are easily chilled and will overheat quickly in the summer. 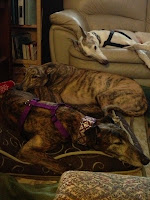 My current pack of three, B's Cowardly Lion (Lion), Red Bud Diablo (Wizard), and Full of Beans (Vincent Van Beans...or just Beans) love to go for walks. Beans,a former foster dog, is a young two year old. He is now officially part of my three-pack.  When I came across this You Tube video of adorable greys sporting fashionable knitted sweaters....I just had to share.


I hope to knit one or two...oops, I guess now it'll have to be three.

This You Tube video came from a fun and informative website called Greyhounds4me.

“I've learned that people will forget what you said,

people will forget what you did,

never forget how you made them feel.”


Honestly I loved ANGELOPOLIS.  As a fan of Deborah Harkness, I was intrigued by this series by Danielle Trussoni.  The genre is not in my normal comfort zone.  However, after reading the novels of Harkness and Trussoni,  I am now a huge fan of  this category of historical fantasy and mythological magic.  This shouldn't surprise me, after all I was brought up on fairy tales and Greek Mythology.  Who doesn't love fairies and angels?  Danielle Trussoni
will ensnare you in her richly imagined suspenseful world of fallen angels. Her writing style is absorbing, rich with imagery and realism.  Enchanting, enveloping and exotic.

ANGELOPOLIS, is the second novel in this series, but easily stands alone.  For those readers who like this reviewer have not read Angelologist, a New York Times bestseller it is not too late to back track. I guarantee after reading book two, you will crave the next book in the series and should definitely pick up ANGELOLOGIST in the mean time.

Highly recommended...plot was full of enough twists and turns. Characters were memorable, often chilling and some otherwise endearing. Verlaine is now an elite angel hunter and works for the Society of Angelology in Paris.   It is now ten years since his appearance in ANGELOLOGIST when he first saw the illuminating Evangeline descend from the Brooklyn Bridge.  Verlaine soon learns that Evangeline is still alive, and the discovery leads him to risk all to pursue her. Who knew there were bad angels among the good?  The angel hunters pursue evil, the fallen angels comprise an army of various species with distinct characteristics.

Historical reference to Rasputin and the the Romanov's, along with a plot that includes the famous Faberge Easter eggs,made for Tsar Alexander III,  add  authenticity and mystery to the plot. Trussoni takes the reader from Paris, to St. Petersberg and finally Siberia-where underneath an off-line nuclear reactor the final showdown takes place.

Don't miss ANGELOPOLIS...an enticingly tense and ethereal adventure among angels and angelologists where the line between good and evil is a fine line to cross.

Disclosure: Angelopolis was given to me by the publisher in exchange for an honest review.
Thank you to : Jane Shim, Publicity Assistant

Thank you to all my FB friends who have sent
condolences and cheer to me during this difficult time.


I was so so lucky to have an intuitive cat as a sweet fur companion for 18 years. He has been my rock during difficult times. Whether I was in emotional or physical stress he sensed my discomfort and would not leave my side until I was better.   How he always knew when I had vertigo,  is a puzzle to me.  He would lay on top of me to ensure I slowed down, while he purred a soothing and healing mantra.

Luckily, Houdini was a healthy boy until the end. I think he just knew it was time to move on. He refused to eat or drink.  It has been so sad watching him waste away these past few weeks.

I was so lucky to be with him at the end.  He died in my arms, snuggled under my chin. He has joined his buddies, Mystery and Webster at the rainbow bridge.

I love you Houdini..you will be remembered and deeply missed.  -Mom xo