Mystery, my first greyhound is 5 today. Yes, she was named after the genre. Why else? Everyone loves a Mystery!!!!


My apologies for missing last week. I have been coping with personal "stuff" and the year end pressures of teaching in a school always takes a toll.

First, Yippee..."School is out for the Summer!!!" thanks to the words of Alice Cooper. I and fellow teachers were dancing with my automated chipmunk to the famous tune on Friday. Yeah, we're totally nuts, no pun intended.

Second, this week I managed to finish up reading "American Hidden History", by Kenneth C. Davis. He also wrote the familiar NYT best selling, Don't Know Much About History." This book was intended to correct many of the inaccuracies in our school textbooks, and also to tell about omissions of those who were key players during the founding of our nation. Who really brought the first slaves to the Jamestown? If Revere didn't say, "The British are Coming." then what did he say? 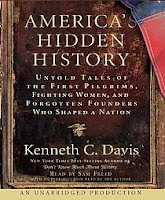 What about women? Three women in particular were not really written about. In one case her story was totally misrepresented. Most of us know about Anne Hutchinson, but not the true story. I doubt that many of us know about Mary Rowlandson, who wrote, The Sovereignty and Goodness of God, one of America's first best selling books. The third neglected heroine Hannah Dustin was captured by an Abenaki party of warriors in the late 1600's. She was taken away but her infant daughter was savagely murdered by the Abenaki natives. One day while the Indians were sleeping, Hannah took revenge and planned to escape. Before leaving she killed 10 Indians, three women and seven children sparing one old woman. She left, but came back for their scalps as proof . She returned home and at that time she was the "most famous woman in America. " Do you remember this woman's name? I know I had never heard of her.

It wasn't until 1874 Davis says she was recognized when a statue was sculpted and erected in her image in one hand holding a hatchet, the other the scalps. These three women are an examples of the information Davis brings forth in his history book of hidden history.

For this post, I focused on the women in this chapter entitled "Hannah's Escape," because recently I have become more and more incensed by the lack of details or even information about the contributions of women in history. It is as if women didn't exist other than to stay at home. I don't believe that happened. I believe there were many with a will and drive to act whether it was voluntary or involuntary to help contribute to the formation of the country. I believe it is important to correct the fallacies, research and edit the textbooks. We owe it to the country and our children, but especially to those strong women who fought so hard alone or along side the Founding Fathers. The country had mothers who, along with being a mother with children, were Founding Mothers hidden in our history, without anyone knowing it. Kudos to Kenneth Davis for righting the wrongs of how we see our history.

Lastly, BAFAB contest to start this week Tuesday. I told you I've been going crazy. But I will come through...promise.!!!!

LOL @ You! Take your time!! And Mystery, Happy Birthday!!

So glad school is out for you. You'll need a few days to relax and unwind. :)

Happy birthday, Mystery. She's such a beauty! and Yes, I do love a good Mystery, lol.

I was fascinated with your post about the overlooking of women in history. I like Kenneth Davis's books, but haven't read the two you've mentioned here... note to self, add books to wishlist

I'm a big history geek, so these are obviously essential in my library!

Now you have piqued my interest in this book. And, I'm sure you read Cokie Roberts' book, Founding Mothers. Thanks, Wisteria!

Oh I so remember that feeling of school being out. Even as a child I used to try to hold on to that first evening when the whole holiday still stretched out before you. It's one of the most magical feelings there is!

I know that exact feeling. I have to go in for post-close with just staff tomorrow. After that tomorrow night I will try to stop time for that magical moment of Peter Pan bliss.

lesa, I did read some of her book, but found her writing very stiff and rather dull. Did you read her book? If so, what did you think?

American Hidden History sounds like a great book. Have a great summer!