Review-The Fort, by Bernard Cornwell..A Novel of the Revolutionary War 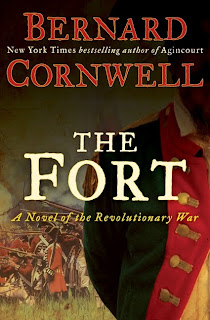 
This video snippet provided by Harper, features the author, Bernard Cornwell as he discusses his latest historical novel, THE FORT.

I was shocked to learn about this devastating naval defeat. It is considered one of the worst naval disasters in American History, second only to Pearl Harbor. It took place in the summer of 1779 at Penobscot Bay in Massachusetts, now a part of Maine. The British with only three small ships faced the enormous fleet of American naval power consisting of some forty ships at Majabigwaduce. Despite the odds in favor of the Rebels, they were defeated. Financially the loss today would is estimated to be the equivalent of about $300 million dollars. Further, Paul Revere is portrayed as an arrogant and obdurate general who would later be condemned and disgraced because of his conduct during this expedition.

What I value in Bernard Cornwell's historical novels is his persnickety predisposition to uncover the history behind the story. The framework for THE FORT begins with the history of the people and events. Then, he reassembles the facts with some embellishment, adding his unique vision resulting in absorbing and astonishing story. He takes a bold position in his novels, even when they are contrary to popular sentiment. After all, Paul Revere is legendary, a Revolutionary War hero in the minds of most Americans. Even though we have come to learn that Longfellow's poem of his midnight ride is a blurred truth, Revere's memory is still somewhat iconic.

I trust Bernard Cornwell's novels and consider them important narratives that add depth to the body of historical literature in print. Character point of view is essential in the overall understanding what happened during the Penobscot Expedition. What really happened? What went wrong? Whose to blame? Each character whether Rebel or Loyalist has a perspicuous role and Cornwell is able to portray both sides without a biased judgment.

Historical notes provide clarification and further details from the author’s research including additional resources for further study. THE FORT is historical fiction at its best, masterfully told with relentless intensity. Highly recommended.

Disclosure: A copy of this book was provided free of charge by the publisher. My review is my honest and unbiased opinion.
Posted by wisteria on 2/07/2011 12:10:00 AM

I'm afraid I don't know very much about the Revolutionary War other than what was taught in school. I do remember Paul Revere though so it's interesting that the author takes a different approach to him.

Thanks for the great review! I love well-written historical novels. I chanced upon a true British first edition of his first book at a local auction once... and it still sits on my shelf, waiting to be read. You've inspired me to move it up my TBR list. (:

Interesting comment on Cornwell finding the history behind the history. The Fort certainly has that in it! I'm a big fan of Cornwell but it took me a while to get into the book. Still worth a read though!