Learning about the Amistad...

on board The Quinnipiac 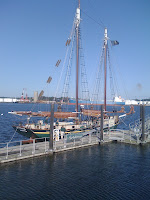 As many of my saloner friends know, this week I attended an intensive graduate course in African American History. Even though we attended from early morning till afternoon, the days flew by and I'm sorry the end had to come. On Tuesday we attended Yale for lectures and discussions with noted historians who outlined Connecticut's and the North's involvement in the slave trade. If not slave owners they were part of the slave society. Later in the evening we were escorted to the pier to hop aboard the Quinnipiac schooner to learn about the Amistad. Donald George, a descendent of the Mende tribe from Sierra Leone is shown in this video clip teaching our class a Mende song. His message to us and the message he takes to all ports while teaching on the Amistad is friendship and peace. The Amistad is in Maine and a great many thanks go to Mr. George for traveling to Connecticut to be with us on the Quinnipiac.

He says that we must confront our past if we want to move forward and make peace. It was a beautiful day to sail, to learn and to sing.

Mr. George was a master at getting us involved in the lives of the slaves, their blight, the trial, the politics and the overall picture of how there came to be a mutiny on the Amistad. 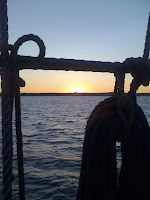 was primarily the books required for my AAH course. I had listed these for you on an earlier post.
By the way if you have never read The Souls of Black Folk by W.E.B.DuBois, you must!!!

Thanks for visiting my blog earlier. The bubbleshare panorama looks interesting. I think I will investigate that.

sounds like an interesting trip to the pier!
great review on 'Heretic’s Daughter'.
enjoy your weekend.

Ohh it sounds like you had lots of fun. Great blog. Thanks for visiting mine. I will be back

What a wonderful week you must have had. I love that sort of course where you submerge yourself in one topic and come away in a small sense a different person as a result. I knew nothing about Amistad until I saw the Spielberg film. I would like the chance to delve more deeply into its history.

Ann...This was an awesome day. There is also a movie called Amazing Grace about a slave called Abdualah Equiano that is fabulous. He was taken at 11, but ended up in many different locations one England. In England he learned to read and write quite well. He wrote a slave narrative which is fabulous about his life. I highly recommend it.
The trial of the Amistad took place in Connecticut, and the home port is New Haven. The case of the Amistad is highly political and quite fascinating. This is very close to my home and we are extremely fortunate. I'll tell you, sailing on this wooden schooner was amazing.
PS...Not planned, but I am in the little film clip which I didn't know existed.

Having seen the movies Amistad and Amazing Grace, taking a tour of such a ship would be impossible without feeling a rip and ache of my heart. It is beyond comprehension how people can strip the humanity from others and treat them worse than they would their animals.

That would definately be a trip well worth taking.

Hi Koolaidmom,
I too understand what you are saying. It is not easy to think of these images. After one concentrated week my mind is spinning. One slave was worth more than a number of plantation animals combined. Amazing!!

The Amistad is a schooner so it was not set up to carry the vast numbers of slaves as depicted in transatlantic voyages.

The interesting part about the Amistad program is its mission of peace and education. We had no tour actually, we sailed and talked to Donald George. Everyone was very nervous about coming onboard this vessel, but George immediately put us at ease. He tells the Amistad story and how the US is a friend to the Amistad and Sierra Leonne.

The website for this non-profit program is unfortunately down at the moment, but the objectives of the Amistad program are to raise awareness by confronting our past, and spreading peace and goodwill. Mr. George says we must never forget our past never, we must face it, no matter how difficult.

Man, oh Man! Being on the schooner sounds like heaven!

re: your comment on my blog about all libraries being local- so true, but it amazed me how different the selections were nonetheless. even in genre- my husband reads scifi and the bookshops had authors out he had never heard of, never seen featured in our stores. it was kind of eye opening. and SF is amazing for bookstores, but so is cambridge where i live! :-)