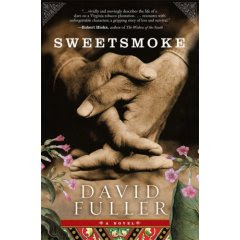 Sweetsmoke, is the name of a fictitious southern plantation owned by Hoke Howard. The story takes place sometime during the Civil War when the roles of owner and master are hanging in the balance. Slaves are running to taste freedom and owners are desperate to maintain the status quo by creating horrific examples of those who dare to flee. Both master and slave are afraid, for the future is precarious and unknown.

Hoke Howard is the owner of Sweetsmoke consisting of the land, tobacco crop, livestock and most important of all his slave chattel. Cassius is one of Hoke’s favored slaves and for some unexplained reason he is treated differently. Their unique relationship is noticed by the slave community as they perceive freedom given to him that others do not have.


Emoline Justice is a freed slave living in town who was once owned by Hoke. She lives in town and is a conjurer, a healer, who nurses Hoke back from a serious injury. During the time he spends with her he learns to read, a punishable offense, often by death. This being Cassuis’ weapon, he keeps his secret from everyone. One day, Emoline is found dead, murdered by a crushing blow to her head from behind. Cassius becomes enraged with anger when he is told and has no choice but to seek vengeance for the death of his friend and teacher. To search for the killer, Cassius must leave the plantation requiring all his wit and skills to survive. He has never had so much freedom, but will he run given the chance?

Fuller’s storytelling is mesmerizing as he unveils hidden secrets of the Sweetsmoke Plantation that intertwine between the slave quarters and the big house. His book is destined to be a major classic of American literature. It should be included on any reading list choice in high schools where there is an American History curriculum and also included in the study of US History in college.

David Fuller’s writing is beautifully poetic, written with lyrical verse and deep passion.
He is an accomplished storyteller whose years of screenwriting experience shows in this debut novel. As in any great movie, I couldn’t wait to find out what happens. At the same time I wanted to savor the story and prolong the ending. Let’s hope his next book is not too far in the future.

PS....I received an email from David Fuller and he has posted this review on his website. What a thrill. Check out his sight for Sweetsmoke it is really phenomenal.

Great review! I just finished reading this myself and I agree I wanted to know what happened but didn't want the book to end at the same time. I look forward to more novels from David Fuller in the future.

Thanks for the nice comment. I agree with you about looking forward to more of his work. Just awesome writing.

I agree. And I am proudly the first to leave a rave review on Amazon too. Wish I could be as articulate as you, well written review for a marvelous book.

Thank you. I should go post on Amazon as well. Then there will be two rave reviews!!

Thanks for the great review. I got selected for a different ER book, but was eagerly awaiting reviews for this!

Sounds Good! Thanks for reading and writing about this new to me author!

How many southern books does this make? Time is running out...

This makes two, but I am reading Mudbound right now from Mississippi.
That will make three. Are you talking about the Southern Challenge?

I totally agree with this review. I didn't think of it when writing mine, but this book really should be read in high schools. I think it can bring home the injustice of slavery more than some of the literature I actually read in school. And yes, David Fuller's website is great! It's designed beautifully, someone very intelligent was put to work on that project, LOL.