Book Raffle Winner. Congratulations Ti, from Book Chatter and Other Stuff. Here is her announcement card. 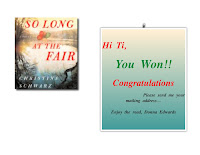 What will be your first book to read in Autumn? I will be reading Saye, by Jeremy H. Walker a debut novelist. Stay tuned to hear more.
I will also be reading Tears of the Desert by Halima Bashir for the Early Reviewers Program at Library Thing. I started reading Murderers in Mausoleums by Jeffrey Tayler.
Tell me what are your first intended reads for Autumn? Let's celebrate our new reading season wherever you live. New Englanders like me will likely relish in the crisp chill in the air and breathe in the sweet smells of the harvest. My cozy book nook is ready. How about you?

Reviews of the week

just blew me away. This is the story of three ordinary yet extraordinary women, Grandma Birdie, her daughter Daisy and her 15 year old granddaughter Olivia Jean who come to live in Cold Water Springs, Alabama. Ms. Glover has created an amazing cast of characters in this beautiful story of forgiveness. The dialogue is so amazingly genuine, offering a glimpse of a culture through conversations that are honest and rarely seen in literature. You can’t get closer to real life than the story Going Down South. As the story spans the lives of the females in one family over generations, they all face life against difficult odds, and harbor deep anger. Through it all they manage to rise to independence and gain a sense of self.

Sometime during the 1960's, Olivia Jean becomes pregnant, and her mom and daddy Turk decide to leave New York to take her down south to live with Daisy’s mom Birdie. Thinking she has protected her daughter from the stigma and shame of an out of wedlock pregnancy Daisy’s life is turned upside down when the preacher Percy Walker singles out Olivia Jean at church. He labels her a whore and and admonishes her for her indiscretion as he preaches from the pulpit.

Moving down south proves to be a tension filled proposition as Daisy and Birdie have been at odds for years. They both conceal secrets from the past that have stirred up malevolent memories. As they choose to let anger and the past fester, conversations are strained, ugly, and hateful, until one day Grandma Birdie decides she has had enough.

Grandma Birdie, is a colorful character with witty jailhouse toughness and sage wisdom with a soft heart for family. Daisy, on the other hand has so much anger, time will only tell when tempers will flare. Olivia Jean at fifteen helps to uncover the many secrets with astounding strength for one so young. These feisty heroines are reason alone to read Going Down South. This book touches on all emotions, and you will laugh out loud. Outrageous at times, honestly human and heartfelt. Fabulous fiction with remarkable realism. Don’t miss this Bonnie Glover’s glorious gift. Highly recommended.

My published review in Historical Novels Review for August Issue 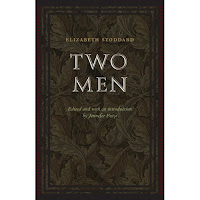 Elizabeth Stoddard, edited and with intro. by Jennifer Putzi, Univ of Nebraska Press, 2008, $19.95/C$21.95/£10.99, pb, 271pp, 9780803293472
Originally published in 1865, Two Men begins when Jason Auster, a carpenter, leaves home to start a new life. His stagecoach makes a stop in Crest, a seashore village in New England where he decides to settle. Finding work at a local church, he meets dark-eyed Sarah Parke, a woman of wealth and social standing. He learns she is the granddaughter of the well-known Squire Parke. Despite their differences in social class, Jason soon becomes a frequent visitor at the Squire’s home, playing whist with Sarah’s grandfather and backgammon with her. They marry and have a son, who they name Parke.
A stroke takes the Squire’s life, and fate puts Jason in control of his estate. Some years later, Osmund Luce, Sarah’s co-heir, shows up with his daughter, Philippa, who he intends to leave with Sarah. Upon learning of his grandfather’s death, Osmund gives Philippa his inheritance. The novel continues as a complex story of love and romance, relationships left unsatisfied, and surprising, difficult choices.
Two Men takes place during the antebellum period, when men, not women, were allowed to express passion, and marrying beneath your class, interracial relationships, and choosing to be a single woman were all considered taboo.
This is not a Civil War novel. It is a period piece that gives a sense of what it was like to live in mid-19th century American society. The language is indicative of the period, and today’s audience won’t find it shocking. Yet, reading the book I kept wondering what the Victorian attitudes of Stoddard's readership would think. No doubt there were many whispers and raised eyebrows. Stoddard was an author ahead of her time; her portrayal of strong women seems almost anachronistic, her descriptive writing flows, and she conveys much of her characters’ thoughts through dialog. Two Men is a remarkable tale; highly recommended.

I have been seeing GOING DOWN SOUTH everywhere! Sounds like a must read.

GT..I'm not sure what you were referring to. LOL

J. Kaye..You have fun too. You would really love the character of Birdie in GDS. She is a woman after my own heart. Yours too!

Going Down South sounds like an exellent read. And so does Two Men.
enjoy your Sunday :)

Right now reading The Amazing Adventures of Kavalier and Clay by Michael Chabon or trying to do so after catching up on what all you folks here on The Sunday Salon are reading, which by the way your selections, especially Going Down South, look great.

Hi Naida and justareadingfool...
I'm back to reading The Fire, by Katherine Neville because I just flooded or screwed up my tractor. I guess I can't mow the lawn for another week. Oh darn...I'll have to read. LOL

Thanks for the great review! Authors like me, who write because we love to write and not because we make money (in fact some of us lose money), depend on word of mouth. We appreciate the time it takes for a review and hope we can keep on being creative and well read!

Thanks for stopping by my blog. I loved your book. When I find a book I want to share, such as yours, its easy to write the review. I love what I do as well. We get a free book, but it is for the love of writing and sharing good books that bloggers like myself keep going. It is nice to know you value the time.

Is there a sequel? What are your plans? I would love to chat on my email. It is tekeygirl(at)gmail(dot)com
.I hope to hear from you.

Great review of Going Down South! I thought Birdie was a riot when she and Daisy were fighting. What a character!

I added your link to my review, which is here:
http://diaryofaneccentric.blogspot.com/2008/09/going-down-south-by-bonnie-j-glover.html