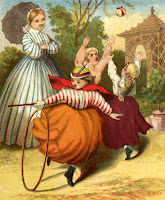 I recently received books from the Independent Publishers Group that included three written by the extremely creative author and illustrator Nick Butterworth. As a media specialist in an elementary school my knowledge of children's literature is keen, but this author was new to me. Here is a short bio from the Harper Collins UK website:

Nick Butterworth is the author of many internationally acclaimed children’s books including ‘Jingle Bells’, ‘QPootle5’, ‘Tiger’ and ‘The Whisperer’ which won the Gold Award at the Nestle Book Awards. He is best known for his stories about Percy the Park Keeper. Nick has also presented children’s stories on television, created a cartoon strip for The Sunday Express Magazine and worked for major graphic design consultancies. He has two grown-up children, and lives with his wife in Suffolk. 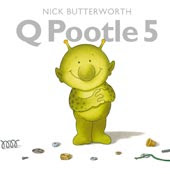 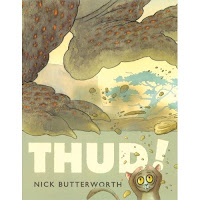 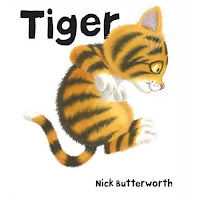 Tiger is a small kitten who thinks he is a big tiger. This is an adorable picture book for ages 4-7. Butterworth's illustrations will draw young readers to this book. What little child doesn't like kittens and tigers, the perfect combination. There is an accompanying CD which is comprised of a Read Aloud version with sound effects, a poem, and a Read Along to help in differentiated instructions. Very cute and cuddly book.

A great tale to use to teach diversity and acceptance. Basil the young bush baby had no sleep one night because he was disturbed by an ugly beast who appeared out of nowhere. Then when he woke up he was afraid of a loud sounding thud, thud, thud he guessed was from a huge monster. Basil asks and gets help from many friend and the ending will surprise you. Great details and expressive faces will keep kids starring as you turn each page. The illustrations are somewhat reminiscent of Maurice Sendak in Where the Wild Things Are. However, where Sendak's book often frightened children, Butterworth creates a huggable menagerie of friends that children will eagerly embrace.

On the way to a moon party Q Pootle 5 ends up on Earth with a broken rocket booster.
His first earthling is a frog who unfortunately can't help him. What will it take for Q Pootle 5 to blast off again? He really doesn't want to stay on Earth. The text is simple with easy to read print and vocabulary that is appropriate for the age. Dear Q Pootle 5 is an originally sweet and non-threatening creature. Butterworth's expressive faces are humorous with attention to crafting each with a human persona. No doubt you will hear, "Please, can you read it again?"
Posted by wisteria on 4/01/2009 08:31:00 PM

These sound like great childrens books. Cute covers too.