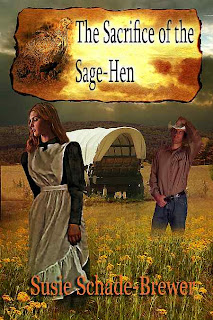 
Charlie is the daughter of Micah Fremont, a trapper and rugged man of the wilderness who, as an Army scout, fought the Apache. Micah raises Charlie alone after her mother dies giving birth. The two share a life together forming a tight father-daughter bond.
Since the age of seven, Charlie has wanted to move west. She marries a storekeeper at the age of fifteen when her father, anxious to provide security for his daughter, agrees to a barter with Grant West. Charlie has an unconventional spirit and a stubborn streak, making it difficult for her to settle into her role as a wife. She resents the secondary inferior position she holds being a wife and finds her life boring. The pair are polar opposites, as she describes her husband “as adventurous as old hay.” When both her dad and best friend announce their plans to go west on a wagon train, she wants to go as well, but her husband shows no signs of moving.
A 24-year-old Texan named Dirks Braelon has decided to make a clean start and travels to Pleasant Gap in the Kansas Territory. His move is precipitated by the way people look at him with dreaded fear in their eyes. Unfortunately, not long after arriving there, his past as a hired gun catches up with him. He must pick up and move again, but to where?
The novel takes place during the period of the Kansas-Nebraska act. Dirks and Charlie both have dreams, and both need to escape. But how? Charlie’s dad provides a cautionary tale to her in the story about a sage hen. He says, “Never trust your future to nobody else....still sometimes dreams come at a price.”
Charlie is a wonderfully entertaining character very true to herself and believable. The story is an entertaining read that will provide a colorful look at this period of history. -- Wisteria Leigh

Hi, Wisteria. Susie Schade-Brewer here. Thanks for the wonderful review of my first novel, The Sacrifice of the Sage Hen. I tried to find an email addy for you, but couldn't find a way to contact you except through Comments.

I have a couple of questions. First, I was wondering if you could change my name to Brewer instead of Brewers, to make it easier for people to find me in a search of your site. I notice it was mis-spelled both at HNS and at your site. Don't feel bad - lots of people do that.

And two, is it permissible to take your review and put it at amazon.com and b&n.com as a reader review for my book? I'm not sure what is allowed and what isn't. Please let me know. By the way - I love your bookworm's dinner site! You are a talented reviewer.

Hi Susie, I just corrected the error in the spelling. My sincere apologies. You know, I had a hyphenated name and it was always getting messed up. That is no excuse though. I am really sorry.

Yes, you can publish this anyplace you want to. It is mine.

Thank you for your kind words about my site and my reviews. Very humbling from a writer like you.

My email is
tekeygirl at gmail dot com

Please feel free to write. I couldn't write to you either except via the comments.

This does sound good, Wisteria. I don't often read books set in this time period, but not for lack of interest. I will definitely look for this one. Thanks for your great review. :-)