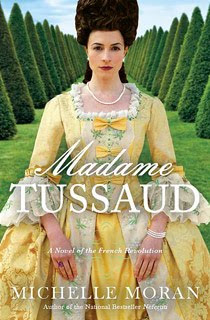 One of my favorite author's Michelle Moran has a new book soon to be released in February 2011. Can it really be only three months till February?

Madame Tussaud takes place during the French Revolution. I just finished reading Revolution, by Jennifer Donnelly (review forthcoming), also from that time period. The French Revolution has always fascinated me. I think my passion for this historical setting began when I read A Tale of Two Cities, by Dickens. I vividly recall scenes from this novel that I read in high school, and the impressions have remained with me all my life.

I was so thrilled to read that Michelle Moran has written a book about Madame Tussaud. I love the cover don't you? I have read Michelle Moran's other books, always exciting and educational. I am surprised she has journeyed away from Ancient Rome, but I am delighted. I can't wait to read Madame Tussaud.

"The world knows Madame Tussaud as a wax artist extraordinaire…but who was this woman and how did she become one of the most famous sculptresses of all time? In these pages, her tumultuous story comes to life as only Michelle Moran could tell it. The year is 1788, and a revolution is about to begin…
Marie Tussaud has learned the secrets of wax sculpting by working alongside her uncle in their celebrated wax museum, the Salon de Cire. From her popular model of the American Ambassador, Thomas Jefferson, to her tableau of the royal family at dinner, Marie’s museum provides Parisians with the very latest news on fashion, gossip, even politics. Her customers hail from every walk of life, and when word arrives that the royals themselves are coming to see their likenesses, Marie never dreams that the king’s sister will request her presence at Versailles as a royal tutor in wax sculpting. Yet when a letter with a gold seal is delivered to her home, Marie knows she cannot refuse—even if it means time away from her beloved Salon and her increasingly dear friend, Henri Charles.
As Marie becomes acquainted with her pupil, Princess Élisabeth, she is taken to meet both Marie Antoinette and King Louis XVI, who introduce her to the glamorous life at court. From lavish parties with more delicacies than she’s ever seen, to rooms filled with candles lit only once before being discarded, Marie steps into to a world entirely different from her home on the Boulevard du Temple, where people are selling their teeth in order to put food on the table.
Meanwhile, many resent the vast separation between rich and poor. In salons and cafés across Paris, people like Camille Desmoulins, Jean-Paul Marat, and Maximilien Robespierre are lashing out against the monarchy. Soon, there’s whispered talk of revolution…Will Marie be able to hold on to both the love of her life and her friendship with the royal family as France approaches civil war? And more importantly, will she be able to fulfill the demands of powerful revolutionaries who ask that she make the death masks of beheaded aristocrats, some of whom she knows?
Spanning five years from the budding revolution to the Reign of Terror, Madame Tussaud brings us into the world of an incredible heroine whose talent for wax modeling saved her life and preserved the faces of a vanished kingdom."

I love Moran's books, too, so I cannot wait!!

Definitely looking forward to this one, although I don't really love the cover.

Jen...The cover is not like her usual, but considering the decadent and intricate hair creations of the day...it seems fits for me. I think the image on the cover is stiff on purpose as one of her famous wax sculptures.

I am very excited about this as well. This will be a historical character that I am not familiar with so I'm very intrigued. Michelle writes a great story!