MARCH  BLOG TOUR -
SOURCEBOOKS LANDMARK
I always look forward to guest author posts who agree to visit my blog.  However, today, I can't wait to share a conversation with one of my favorite  writers, a diva in the historical fiction realm, Elizabeth Chadwick.  A while ago I read and reviewed For the King's Favor.  Ms. Chadwick continues her rousting story in her new release, To Defy a King.(review)


Elizabeth Chadwick Guest Post
Many thanks for inviting me to guest on your blog.  I thought I would talk a bit about the locations mentioned in To Defy A King that Mahelt Marshal would have known as a child.  Many of these have disappeared, or are ruins but they places where they stood are still there, even sometimes as only echoes.
Places mentioned in To Defy A King

The Manor of Caversham, Berkshire
The novel opens here.  Mahelt’s father, William Marshal had a fine manor and chapel dedicated to the Virgin Mary at Caversham, close to the Thames and just across the river from Reading Abbey and within easy striking distance of London. In the 13th century, the manor was in Oxfordshire.  Mahelt would have spent time here on and off throughout her childhood as it was a place of which her father was very fond.   The manor is no longer there but there is a Victorian stately home and grounds, now called Caversham Park.

Hamstead Marshall, Berkshire.
This was a Marshal manor where Mahelt’s father would have spent many years of his boyhood and was still an important place to William the grown man.  It stood close to river Kennet but was not particularly strategic. Again, Mahelt would have visited this place with her family as a child.  There are some obscure mounds at Hamstead that may be the remains of motte and bailey fortifications, but are more likely to be much earlier than this, possibly Neolithic.

Chepstow Castle.
Also known as Striguil which derives from a Welsh word meaning ‘River Bend’ this is a castle on the Welsh Marches set on high cliffs above the River Wye.  It was originally built by the Norman warlord William FitzOsbern as part of a chain of castle to protect Gloucester from the Welsh and also to dominate the Welsh.  The castle doors still exist from William Marshal’s time and Mahelt would have looked upon them every day when she was staying there.  The castle was actually part of her mother’s inheritance from the de Clare family.
http://www.castlewales.com/chepstow.html

Framlingham Castle
Framlingham Castle in Suffolk was the caput or main castle of the Bigod family into which Mahelt married. It had been built by her husband Hugh’s great grandfather, then razed to the ground when the grandfather rebelled.  Hugh’s father, Roger, had worked all of his life to have the family restored to favour and had gained permission to rebuild the castle on a grand scale with thirteen great towers and fine new livng quarters for the family.  The old hall, which was one of the few parts of the castle to be left standing, was retained as further living quarters, and had a chapel attached.  Mahelt was to live at Framlingham for a great deal of her marriage to Hugh.
http://www.castlewales.com/chepstow.html" http://www.castlewales.com/chepstow.html


Thetford Priory
Thetford Priory was the burial place of the Bigod Earls of Norfolk.  They had a house here too and were occasionally in residence.  The priory consists of just a few ruins now, and the site of the Bigod house has made way for other housing, but in its heyday, the Priory of Our Lady of Thetford was a great Cluniac monastery.
http://www.english-heritage.org.uk/daysout/properties/thetford-priory/

Settrington
Settrington, a beautiful village in  East Yorkshire was the main Manor of the Bigod family’s secondary holdings in the North of England.  Later in her life, a widowed Mahelt would give Settrington to her younger son Ralph.  At one time the family had a manor house here, but it has gone.  However, Settrington House stands beside the site of the old manor.  In the novel, Mahelt and Hugh spend their honeymoon here.  I don’t know if they did in real life, but it is thoroughly feasible that they did.  Hugh had been given Settrington by his father when he was 17 years old and it had that feeling of personal possession to him.
http://freespace.virgin.net/owston.tj/sett.htm

Ipswich
The Bigods had a strong, vested interest in the grain port of Ipswich.  They had their own quay in the town and it was with their help that Ipswich was granted a charter by King John in 1200.  http://users.trytel.com/~tristan/towns/ipswich1.html


Friday Street, London.
The Bigod family had a house and a jetty on Friday Street in the city of London.  This has long, long gone,  but Mahelt would probably have known the property and stayed there – as she does for several scenes in the novel.

Salisbury
The Salisbury that Mahelt would have known is now called Old Sarum and stands two miles north of the new town of Salisbury which was founded in 1219 by the then bishop, Richard Poore after several disputes with the secular rulers of  the existing town.
However, in Mahelt Marshal’s day, the original Salisbury was still a busy place with a cathedral and a royal palace.  It was the home of her brother in law William Longespée, earl of Salisbury, and his wife Ela who was related to her. It had also been the childhood home of her grandmother, Sybilla FitzWalter.  In addition, Old Sarum had also housed Eleanor of Aquitaine during her long years of imprisonment.  It’s a ruin now, but open to visitors, courtesy of English Heritage.  The cathedral at the new Salisbury to the south, holds the tomb of William Longespée.
http://en.wikipedia.org/wiki/Old_Sarum

Bradenstoke Priory
Bradenstoke Priory housed the tombs of Mahelt’s paternal grandparents, John FitzGilbert Marshal and Sybilla, daughter of Walter of Salisbury.  Mahelt would probably have visited the priory to pay her respects to the tombs of her ancestors.  Today there are a few scant remains lying on private property close to an RAF base.  Parts of Bradenstoke were boxed up and shipped to the United States by William Randolph Hearst and have since been lost, although it is rumoured that Bradenstoke’s great tithe barn is still around somewhere in the USA, all crated up.    http://www.burtonbradstock.org.uk/History/Bradenstoke%20Priory_files/Bradenstoke%20Priory.htm


Other places Mahelt Marshal would have known that do not feature in To Defy A King.

In Normandy the castles of Longueville and Orbec.

In Ireland, the fortress of Kilkenny, home of her grandmother, the Princess Aoife of Leinster.
http://www.kilkennycastle.ie/en/TouroftheCastle/

In her second marriage, the main castles she would have known were:
Castle Acre
http://www.english-heritage.org.uk/daysout/properties/castle-acre-castle-and-bailey-gate/


Thank you again Elizabeth for this fabulous post with the history of the castles and the website links. I'm sure the readers will be delighted. 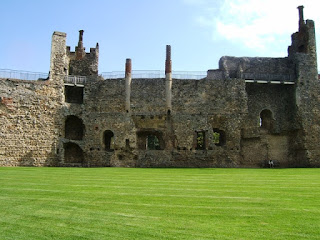 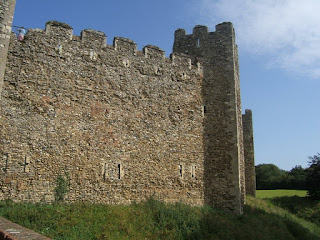 This was wonderful to read.
I love matching real places with real people and events especially when reading a novel!
I adore Elizabeth Chadwick's novels and also read and reviewed 'To Defy A King'. Well Done!