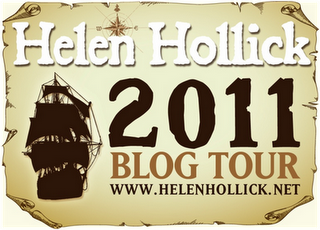 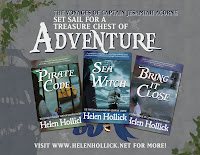 I am so excited to be a part of Helen Hollick's 2011 Blog Tour. As many of you know Ms. Hollick is one of my favorite historical fiction writers. I have read and reviewed many of her novels, most recently, The Forever Queen and The Chosen King. When I was offered the opportunity to be included on of this Blog Tour introducing my readers to her Pirate Trilogy, (series will continue after the third voyage) I couldn't resist.  Read on to see how you can enter to win your choice of one of the three books in her series.

Today I will have a review for you on Sea Witch, The First Voyage of Captain Jesamiah Acorne. On July 22nd, Helen will join me as a guest to talk about England, her home.  Take a moment to glimpse at the trailer.  Perhaps you too will become bewitched by the allure of Ms. Hollick's special craft.  Prepare to be beguiled.


Of course we all know that pirates are not ordinarily as charismatic as the movies would lead us to believe. But what if they were?  Johnny Depp has certainly proved his box office value, irresistible heart tug and memorable character in his Pirates of the Caribbean Series. “Savvy”?  Now Helen Hollick introduces adult readers to Jesamiah Acorne an alluring revile for your affections, perhaps even more memorable than any fictionalized pirate in history so far.

Jesamiah Acorne grows up brutally bullied by his half brother Phillipe Moreno who, disgusted by their father’s past, seeks revenge through Jesamiah’s life.  Jesamiah finds freedom and the start of a new life as a bold buccaneer taking to the ocean and living on a ship.  One day, Jesamiah’s band of pirates fail in the quest to plunder a British vessel. As their plan backfires, Jesamiah peers through his telescope and his eyes rest on the stern of the ship. In the small circle view he spies a figure. He is surprised to see a young girl, a woman, but that can’t be.  He experiences an enchantment, unaware that he is bewitched by the white witch, Triola Oldstagh.  What he doesn’t realize is that they will meet again, but Triola is well aware of their destiny for she has “the craft.”  Triola is not the only woman to seek Jesamiah for herself. Tethys, lives in the ocean deep and is a supernatural spirit of seduction who wants to claim Jesamiah for herself with the passion of the Greek Sirens from mythology. Only Tethys does not want Jesamiah alive.

Helen Hollick takes the reader on a journey of high sea adventures, uniquely envisioned characters and romantic dazzlement. The predestination of the love match between Jesamiah and Triola is always just beyond reach, as Jesamiah is tugged back to the ocean forcing him to choose between his desire for freedom on his ship or his love for Triola.  The Sea Witch is a suspenseful romance with sudden surprises, twists and turns and exciting drama that will ride a tide to the end. Jesamiah has that magnetic charm that will raise a twinkle in your eye and captivate your heart with a bold spirit of adventure.

Sea Witch takes place around 1716 in the oceans between Africa and the Caribbean.
Could Triola and Jesamiah be a new love match to live on in historical fiction literature, or will the sultry waves of the wraith Tethys win the spoils?   Sea Witch contains a pirate’s treasure of pleasure, highly recommended.


Please join me on July 22nd when Helen Hollick will be my guest as she talks about England, her home.

Good Luck to Everyone....I hope you enjoy all the voyages!!!

Wow. I love this book already!!!
I follow your blog!
Thanks for the giveaway!
allisonmharper@hotmail.com

*blush* thank you for such a wonderful review, I am quite overcome. Jesamiah, on the contrary, is swaggering about with a huge grin on his face!

Good luck everyone who enters the competition to win a copy!

Often when I think of pirates, the first thing that comes to mind is a fearless, adventurous and also lonely man. It is just him and his beloved sea for better or worse, and many times it is for worse when his crew is not fighting diseases and the ship is not battling rough waves and jagged rocks. What doesn't come to mind is his reason for taking on the sea. For Jesamiah, the reason is freedom from a bullying half-brother. It is fitting then that he finds solace in the sea and meets Triola who is a white witch and healer of all things. Her nature is just what the Captain needs.

^^ I forgot add, if I win I would love to read PIRATE CODE, book two of the Voyage series.

I have been dying to read Sea Witch, so I will choose the first part.

Thanks for the giveaway!

I think freedom was the main objective - a pirate ship was (usually, but not always) a democratic place, even the captain was elected - or de-elected if he was no good. The saying "a short life but a merry one" was very true.
Which is why there werer several thousand pirates in the Caribbean around 1718 of course!

Loved the review! If I win I would like Pirate Code.
I follow via gfc as mamabunny13
I follow via networked blogs-mamabunny shelor
Thanks for the giveaway!
mamabunny13 at gmail dot com

Thank you for opening it to all. Much appreciated.

thank you for the wonderful comments - I'm overwhelmed by the level of support I've received.

You can find out more about Bronwen, listen to a few excerpts and enter the compettion by leaving a comment at the bottom of
http://helen-myguests.blogspot.com/

good luck - and thank you again for showing such enthusiastic interest in Jesamiah and my books!