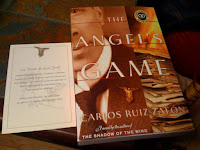 
I'm so excited!!! I just received an ARC gift from Doubleday and Carlos Ruiz Zafón of The Angel's Game due to be released in June 2009. I absolutely loved The Shadow of the Wind! I fell in love with the writing, the characters, the story and the author's talent. I not only recommended this book to friends when it had just been released, but I bought it for many. It was that good. I even have a quote on my blog from the book.


Now, he has written his second book, and I have waited so long for this day. When I went to the mailbox today, I couldn't contain my enthusiasm. I dare not start it, because I have three books going right now.


Included on the front page inside was a really nice letter from William Thomas, Editor in Chief and Publisher for Doubleday. In his letter he says, "If you are a fan of Carlos Ruiz Zafón's novel The Shadow of the Wind, you undoubtedly opened this package with glee." His words couldn't have been more prescient.


This book has been on the best seller's list in Spain, Germany, Italy, Poland, Norway and Portugal. According to the back cover write-up, "1.6 million copies of the Spanish edition are in print and it is the fastest selling book ever in Spain."

It's so much fun to get a surprise like this! I say, go ahead and plunge in!

Go for it -- and have fun!
btw - I received that today as well. I haven't read THE SHADOW OF THE WIND. Do you think I should before I dive into this one? I can't really figure out if it's a stand alone or continuation.

I got this today as well! I haven't read The Shadow of the Wind (yet!), but I read the first paragraph of The Angel's Game and knew immediately that this book is something very, very special.

go for it wisteria and enjoy it!
http://thebookworm07.blogspot.com/

Elizabeth...Surprises like this make the day sparkle. I think I have to read it!!

Gwendolyn...I can't really tell if this is a stand alone. I think it is. Although you will be missing a great read if you don't read Shadow of the Wind.

Ruth@Bookish Ruth..I did the same thing as you did today. and that's how I got hooked on The Shadow of the Wind when it was an obscure first out debut. His writing is so phenomenal.

Oh, you must need a few smelling salts = p.
Enjoy your book. Happy Reading,Wisteria. I am so happy for you = }.

You should definitely just go for it, anything else you read before this won't get your full attention, you'll just be wishing for The Angel Game.

Well done on receiving this. It has just come out in England, but I have still to read Shadow in the Wind ( how bad is that!). I hope you love this one as much.

I kind of like the cover of that though it looks like it could belong to two seperate books. Knew that name sounded familiar! The Shadow of the Wind was one of my favorite books the year I read it.

So, should I put all aside and just go for it? I would!!!