Review-Stranger Here Below, by Joyce Hinnefeld 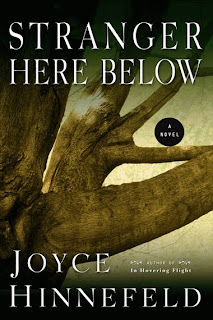 Book Description from the Publisher
In 1961, when Amazing Grace Jansen, a firecracker from Appalachia, meets Mary Elizabeth Cox, the daughter of a Black southern preacher, at Kentucky’s Berea College, they already carry the scars and traces of their mothers’ troubles. Poor and single, Maze’s mother has had to raise her daughter alone and fight to keep a roof over their heads. Mary Elizabeth’s mother has carried a shattering grief throughout her life, a loss so great that it has disabled her and isolated her stern husband and her brilliant, talented daughter.
The caution this has scored into Mary Elizabeth has made her defensive and too private and limited her ambitions, despite her gifts as a musician. But Maze’s earthy fearlessness might be enough to carry them both forward toward lives lived bravely in an angry world that changes by the day.
Both of them are drawn to the enigmatic Georginea Ward, an aging idealist who taught at Berea sixty years ago, fell in love with a black man, and suddenly found herself renamed as a sister in a tiny Shaker community. Sister Georgia believes in discipline and simplicity, yes. But, more important, her faith is rooted in fairness and the long reach of unconditional love.
This is a novel about three generations of women and the love that makes families where none can be expected. http://unbridledbooks.com/our_books/book//stranger_here_below

STRANGER HERE BELOW, is an intensely rich novel that left me temporarily paralyzed. Hinnefeld is an author with a story to tell that reaches beyond the last page. The three main women in this book Maze, Mary Elizabeth and Georginea are interconnected to each other with a family history that has far reaching influence. Even though the book ends in 1968, themes and events that shape the characters lives still still hold value today. I can’t say I identified with any specific woman, but more an amalgamation of all many personalities. Women who read this will no doubt experience a similar connection, perhaps more of one than another, but with heartfelt empathy for all.

It is hard to fathom the influence the men in the story held over the women’s lives through the generations with 21st century eyes. Yet, given the time period of the setting, it is not surprising. I was unable to abandon the lives of these characters. I kept flipping back to reread passages with many thoughts to ponder and meaning to interpret. The lives of those who live in Stranger Here Below are compelling, not easily forgotten, nor is the reasoning presented in Sister Georgia’s life reflection:

“She had spent fifty years hiding, she knew now, from the black-coated men who drove the engines of the world. Youth--she and Tobias, Maze and her young man and their friends--so powerless in the face of their laws and their wars. yet children were born, Marthie among them, faces without masks and hearts still pure, their futures unknown.”


Hinnefeld presents her novel in chapters that fluctuate among the varied characters and from a time period that spanned from the 1870‘s through 1968. In my opinion, this technique kept the reader on edge from the onset. Absorbing throughout, this attracted the reader with multiple perspectives and the multi-layered depth given by hearing from all three women.
This is a deeply reflective and noteworthy historical fiction novel I highly recommend.

Disclosure: The copy of this book was sent to me for review as a participant in Library Thing’s Early Reviewer program and represents my unbiased opinion.

Sounds like a must-read! Thanks for the great review, can't wait to get my hands on this one!

I wouldn't miss this one. Totally absorbing.