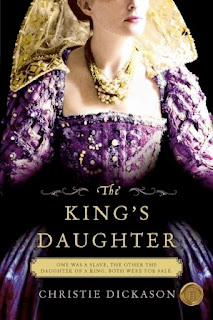 
Book Description from the Publisher
The daughter of James I, the Princess Elizabeth would not be merely her father's pawn in the royal marriage market.
The court of James I is a dangerous place, with factions led by warring cousins Robert Cecil and Francis Bacon. While Europe seethes with conflict between Protestants and Catholics, James sees himself as a grand peacemaker—and wants to make his mark by trading his children for political treaties.
Henry, Prince of Wales, and his sister, Elizabeth, find themselves far more popular than their distrusted father, a perilous position for a child of a jealous king. When Elizabeth is introduced to one suitor, Frederick, the Elector Palatine, she feels the unexpected possibility of happiness. But her fate is not her own to choose—and when her parents brutally withdraw their support for the union, Elizabeth must take command of her own future, with the help of an unexpected ally, the slave girl Tallie, who seeks her own, very different freedom.
My Review
James I is not a familiar king to me and curiosity brought me to agree to this blog tour. I was drawn to this novel of Dickason’s more for the historical fiction elements of his daughter, Elizabeth. She is portrayed as an intelligent and energetic woman who is a puppet to her father, available as an object to parade and show those of interest her suitability as a wife. The potential alliances this will achieve has her mercurial father, King James I in constant flux. He uses her as a toy, and it always appears as a game of power to him and a source of irritation for Elizabeth. James I comes across as an arrogant and cold father with little love for his daughter. She is treated with equal harshness by her mother. Her slave Tallie, is granted her manumission, but it will take Tallie’s help and courage to stand up to her father to free herself.

This was a quick and delightful read by an author who imagined the life of Elizabeth. Without primary sources to help her formation of the character, she presents a likable and lively personality. Her author’s notes separates the truth from the fiction, always appreciated. I enjoyed this book and would hope that Elizabeth was in life as she is portrayed, an astute witty female determined to find love and happiness in her life.

Historical fiction is a genre I embrace because when well written, will stimulate inquiry leading me to research more about the period or the subjects in the book. THE KING'S DAUGHTER intrigues me to that point, with a desire for more.

Disclosure: My copy of The King's Daughter is an ARC provided by TLC Book Tour.

Special Weather Note:
I apologize for not being able to publish my post today until now. (7:00PM) The storm in CT caused widespread power outages due to the high winds. I am still digging out. I hope everyone loves the snow. I do, but today, I am exhausted.

I love a good historical fiction and this sounds like a great story. Putting it on my list.

Hope you are doing well Wisteria! Bundle up and happy holidays! :)

Hi Iliana..Happy Holidays! Doing ok how about you?
I had never read Dickason before. I liked her writing.

I agree that the best historical fiction will want to make me do research. If this did that for you, then I'm sure it's fabulous!

Sorry to hear about the snow dumping on you. Fortunately, I'm safe here in California. :)

Trish...You should have seen the end of my driveway. The plows had buried me in.