Daughters of the Witching Hill, by Mary Sharratt 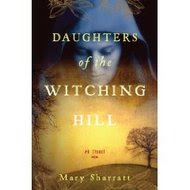 
They call her Demdike, her name is Elizabeth Southerns, Bess to some, and she lives in Pendle Forest in Malkin Tower. She is a poor woman known to many as a healer, a blesser, but to others she is feared as a witch. In concert with her familiar spirit Tibbs, she uses her folk magic to heal the sick, both man and beast. She can foresee the future.

One day her best friend Anne, pleads with her to share her charms to use against a man who has taken advantage of her daughter. Reluctantly, Bess agrees, realizing only too late that her friend has harnessed the power for nefarious plans. She soon recognizes that her friend is “unstoppable.


Over the years, Bess tries to pass her healing craft along to her granddaughter Alizon, a reluctant recipient. Ironically, as Alizon takes a walk one day she encounters a peddler on the road. She intends to purchase pins from him in order to mend her threadbare clothes. She becomes incensed when he refuses her, and calls her a beggar and thief. Brandishing threatening words of malice, she lashes out in anger declaring, “The Devil take your mean heart.” As the peddler proceeds along, he is felled by a stroke causing Alizon to freeze in disbelief. Could she really be the instrument of his malady?

A local official eager to bring the coven of witches to justice proceeds to investigate this incident leading to his discovery of many other unexplained happenings in Pendle Forest. Through countless interviews and clever manipulation of friends and relatives, Roger Nowelle seeks to bring the accused to the hangman’s noose.

Daughters of the Witching Hill, provides an historical fiction account of the actual Lancaster witch trials of 1612. The main characters and the story are taken from the actual records filed by the court clerk, Thomas Potts in 1613.

In her novel, Mary Sharratt has uncovered an alarming tale from this pre-Reformation period England. A story of powerfully strong women, friendship, betrayal and forgiveness, it unfolds like a magnet of intrigue shedding light on how easily the lines can become blurred between Christianity and folkcraft/witchcraft, leaving the innocent to suffer with pending death. An elegiac story, historically rich and hauntingly memorable.
Posted by wisteria on 2/15/2010 11:26:00 AM

I am always fascinated with witch trials so I would probably enjoy this book quite a bit.

I just noticed Drood on your left hand bar - I bought that today and I can't wait to read it.

Fantastic review Wisteria. There is something so fascinating about the witch trials isn't there? To think that this really happened. Will be adding this book to my list.

Ti..I am too! I remember reading Heretics Daughter and loving that one too. This one is unique to me because of the setting in England. I'm more familiar with Salem.

Vivienne..I haven't read Drood, but after reading Black Hills, I really want to read it now. (Review is done, waiting to post)

Iliana--Thanks! I know you will like this one. Like you, the whole witch trial era intrigues me.

This is another one I really want to read. It sounds so good. Thank you for your great review!

Glad this one is good. I'm reading it for her blog tour and can't wait!

Literary Feline..Thanks! I know you will enjoy this one too.
Dar-Can't wait for your post during the blog tour. When is it?

The tour isn't until April. I have a feeling I'll probably read it before that.