In honor of the memory of Dr. Martin Luther King Jr. I wanted to dedicate my Sunday Salon to his work and life.

Whatever your political beliefs are, Tuesday should be a day of bipartisanship and citizenship where we stand proud during the historic Inauguration of Barack Obama. It still amazes me that this year we had a woman and an African American man running for the Democratic candidate. Not too long ago this scenario would have been inconceivable to many. But one man, we honor on January 19th, Dr. Martin Luther King Jr., had a dream, and when Americans went to the polls this past November, it was realized when they judged Barack Obama "not by the color of" (his) skin, but by the content of (his) character." He had a dream and it came true. To a great man, I honor you Dr. King.

With such an historic week ahead for the nation, I'm sharing with you a book that was sent to me by Independent Publishers Group. 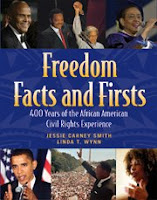 This is an affordable encyclopedia of information that's purpose is to expand and add to the vast history already compiled on the African American struggle for civil rights. The authors also included lesser known people who were overlooked in previous writings. Women are given historical credit, where in past works their roles were minimized.
It is divided into these nine chapters.
-Arts & Entertainment
-Civil Rights
-Education
-Journalism
-Law and Government
-Organizations
-Political Activists
-Religion and Sports
This is a perfect quick reference guide for all schools and the general public. It would make an ideal book to peruse for ideas for student research. The publication of this book spans the years from the abolitionist anti-slave movement through to the election of Barack Obama. It contains an extensive bibliography and detailed index for searching. This should be in every school and public library and citizens will find this a perfect must have compliment to their growing history book collection.
Posted by wisteria on 1/18/2009 04:08:00 PM

I'm really looking forward to the inauguration on Tuesday. I think Martin Luther King Jr. would be proud.

Hi Literary Feline
Me too! We have a school wide inauguration-a-thon
happening. I think it is going to be very exciting for the kids too.

wonderful post! we are looking forward to the inauguration, my kids are so excited about it too :)

Hi Naida..We're setting up a projector in the media center tomorrow to have the TV project on a big screen for everyone to pop in. Very exciting.

Thanks Marie..what an amazing day yesterday!