The Secrets of Newberry by Victor McGlothin 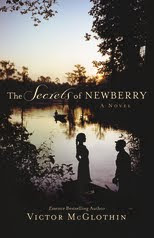 
Full Description from the Publisher:
"For Ivory Bones Arcineaux and Hampton Bynote, life in 1950s New Orleans couldn't be sweeter. Friends since they met in an illegal gambling house in Newberry, Louisiana, they have their pick of all the fine women, good food, and hot nights they can handle. They seem to have it made-especially Julian who begins to make a new life for himself after meeting the beautiful, classy Magnolia Garbo at a social. But both men are about to find out that letting the good times roll can be deadly when a simple robbery goes wrong and Julian witnesses Bones murdering a man in cold blood."


Review: The Secrets of Newberry
Just when you think you have everything figured out, this story will take an unexpected turn to keep you engaged as you can’t help but turn to the next page. Pearl Lee works as a supervisor in the washhouse, delegating soiled linens and underclothes among the other black women who work on the Delacroix Plantation. The women share a secret, a secret agreement between the white men in this powerful family and the black women who serve and live in the rows of slave shacks next door. They all know and suffer with the agreement. Their husbands are in the dark, the secret is unspeakable and unseemly, but all agree it is necessary to keep their men safe, so they endure.

Characters who comprise this complicated story are unforgettable. Magnolia and Pearl Lee are strong women who demonstrate the depth of their emotions when they back it up with actions. Hampton struggles to provide a good life for his family. He lives on a tightrope intent on staying straight with the law, but his balance is not always steady.

Are there some secrets worth dying for? Is murder ever justified? Suspense, mystery, racial inequality and the backdrop of Jim Crow Louisiana in the 1950’s accompanied by a superb realistic story with intrigue will more than satisfy historical fiction fans. Victor McGlothin’s storytelling will force you to ponder life questions of faith and belief. Masterfully told and highly recommended.


Disclosure: This book was sent to me at no cost from Hachette Book Group. This review is my own unbiased true opinion of The Secrets of Newberry, by Victor McGlothin.

This sounds even better than I expected. Great review.

I just wanna read it as it is set in New Orleans. Always a favourite setting for me.

Vivienne..I'm like you! I love the southern atmosphere. New Orleans is always calling me.

I hadn't heard of this one but it sounds good, and a something quite different. I like that book cover too!

This does sound interesting. I like New Orleans settings in books. Excellent review.

Iliana..It does have a nice cover. I definitely recommend it.