Review-YOUNG BESS:THE GIRL WHO WOULD BE QUEEN, by Margaret Irwin

As the story begins, Young Bess is sailing on the royal flagship in the company of Tom Seymour, the Admiral of the Fleet, she is twelve. He is exceedingly handsome and quite the lady’s man. Elizabeth is called “the little bastard”, the daughter of Anne Boleyn, the second wife of Henry VIII. She has a sharp witty tongue, amusing for some, yet often too vitriolic. One day her carefree remarks exceed her father’s tolerance and she is banished from his court. When Henry dies, his fragile son Edward takes the throne, but due to his age, Edward Seymour assumes the role as The Protector. Elizabeth is sent to live with Katherine Parr, the king’s widow and her new husband, Tom Seymour. Impropriety and ignominy follow Tom as he continues to pursue Elizabeth, a girl he has always wanted, and would have preferred to marry over Katherine. When Tom is arrested and taken to the infamous Tower, his life and Elizabeth’s reputation are jeopardized. Neither of the pair take it seriously.


Evaluation
I truly loved Elizabeth in this novel, but I am biased as my adoration for her is high. Comparisons are often made to her mother, the infamous Nan Bullen (Anne Boleyn). Irwin shows her naivete as a young girl. Her relationship with Seymour takes place in this first book leaving questions that will never be answered. Does she love Tom Seymour? Is she a tempting vixen, or an innocent impressionable young girl infatuated by the attention paid to her by an attractive man? A significant moment occurs for Elizabeth when she is told by Katherine that her fate may someday be Queen of England. That she never expected or imagined herself as Queen of England until her teens is surprising to me and an interesting twist in this story. Suddenly, her life has purpose beyond the blithe and silly behavior that has up till know generated scandalous gossip. She pursues a plan to buff her tarnished image and emerges a royal princess of charm and grace. I felt sorry for Elizabeth as she was brought up by four different stepmothers, and didn’t know her own mother. The fact that she was compared to her mother so often, couldn’t have been good for her self esteem, yet she is determined to triumph. She seems vulnerable yet her clever insight and resolve is always impressive.
The story is very good, the characters are fully realized and who wouldn’t like reading about Young Bess. The story is somewhat wordy and I found myself rereading passages for clarity. Much of the book is devoted to the Seymour brothers. Edward is portrayed as annoying and greedy, Tom is a shameless flirt and clueless about his brother’s ambition. Edward, the young king is a pawn on a chess board, easily manipulated by black and white to suit their own position. The book didn’t really turn around for me until almost half way through. The fact that I enjoy reading about Queen Elizabeth and look forward to the entire trilogy saved me from abandoning this one early.

What were they thinking.....
Elizabeth on marriage, speaking to Tom Seymour

“...I have not the slightest intention of being married, and if ever I should think of it (which I do not believe is possible) you would be the first to whom I should make known my resolution.” (275)

“I’ve learnt about marriage from my stepmothers,’ she said, sliding a look at him.”

“Seriously, my Lord, my first stepmother, Jane, died in childbed, and so was the only past wife he spoke of with respect; my second, big Anne Cleves, he shoved out of the way for my pretty cousin Cat Howard, whom he beheaded-and my last one gave me a step-stepfather,’ she finished, and this time she did not look at him.”(275)

“He blinked down the table at the girl, as lithe and whippy as a greyhound puppy, and the light glinting on her red-gold hair. ‘Nan Bullen’s brat!’ he muttered to himself, ‘a wheyfaced scrap of a thing like her mother, a green apple, a codling,’ he drooled on, regarding her with a fixed and menacing eye.” (50)

This book was read for the ABC Historical Fiction Challenge, hosted by Historical Tapestry. 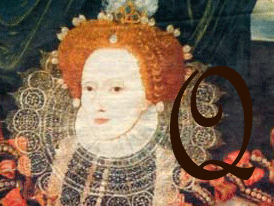 I have yet to read any Tudor books but I really want to since everyone else seems to love them. This sounds like another winner.

I bet I'd love this! I remember watching the 1953 movie adaptation of the same name as a kid several times.

It sounds really interesting, even if it didnt start off that way.
Great review! I like this genre.
http://thebookworm07.blogspot.com/

Bermuda....This one is slow in spots, but I still liked it.

Ladytink...I didn't know there was a movie adaptation. Thanks for sharing that. I would love to see if I could get a copy.

Naida..I was glad I stuck with it. I'm looking forward to book two. d

Perseverance won out. Great review and happy to hear that the book did turn around for you once you past the half way point. Will note this one down for the Book list now.

Aisle B...It's funny, but my kids at school were just asking me this week if I give up on a book and when. This generated a huge discussion. I'm really happy this one flipped around.