Book Description from the Back Cover
"Married to an older man who sees her as little more than a possession, Claire Winston feels trapped and unhappy, but she knows her personal suffering pales in comparison to the hardships of the nation, which is teetering on the precipice of civil war. And she has a secret that helps ease her despair: her family's devotion to the cause of assisting runaway slaves to freedom, a purpose she embraces, and of which her husband is unaware. Still, the empty pretense of her marriage makes her vulnerable to temptation, and soon she finds herself captivated by John Taylor, her husband's nephew. In his arms she finds the passion and tenderness her marriage lacks, but as much as John loves her, he is devoted first and foremost to the Confederacy, and to the band of rebel guerillas known as Morgan's Raiders. Separated from John for more than two years by the forces of history, and by her husband's machinations, Claire will travel boldly across the war-torn country in search of her lover. Until, disguised as a male soldier, she finds herself drafted by none other than General Morgan himself, swept up in the greatest guerilla raid in American history, and caught between her loyalty to the Union and her love for John."

Claire thought she was in love with her new husband Henry, but soon after they were married his obsession with photographing her became a source of discomfort and revulsion. He wouldn’t touch her, in fact the marriage was never consummated. Claire is not even allowed to touch him when they lay in bed at night. The mysterious green album sends shudders through Claire’s veins as it contains indiscreet photos of her, oddly provocative and perverse, a secret fetish of her husband’s. He worships her beauty in an artistic way, but for Claire, the camera lens becomes a dreaded focal point to her marriage.

When she meets John Taylor, Henry’s nephew, their mutual attraction is explosive. This event will alter her destiny as The Notorious Mrs. Winston takes on the persona of Zeke, a young boy eager to join the infamous Morgan Raiders so that she can be with her beloved.

Historiographically, General Morgan and his company of about seventeen hundred men did exist and their presence in the Ohio River area of southern Indiana was intended to cause havoc for the Union men. The fictional Claire, although she claimed allegiance to the Union cause, fought with Morgan’s men to be with John. She is clever, and devoted to him with an unstoppable tenacious willful spirit of adventure.

While it is hard to accept that Claire was able to pull of the disguise of a rebel soldier, when her beauty was evidently striking, I enjoyed her character. Her loyalty and dedication to the Underground Railroad is evident early on, yet she must somehow work with the enemy in order to save herself and a future with the man she loves. Somewhat dramatic in a soap opera way, this still is an enjoyable read. Mackey has since written The Widow’s War, set in the Civil War period which in my opinion is superb. Those looking for an adventurous book for the Civil War Challenge should consider this one. 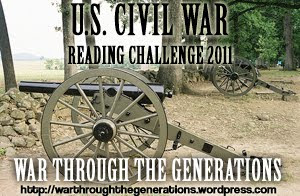 we've added a link to your review from the U.S. Civil War Book review page, and a snipped will appear on the main page on Jan. 31.