As a huge fan of Michelle Moran, I am delighted to announce her latest book Madame Tussaud:A Novel of the French Revolution will be in stores sometime around or on February 15, 2011.  To kick-off her book release, I am hosting a book giveaway for a signed copy of Madame Tussaud and a pair of aristocratically delicate cupcake earrings. (Take a look below)
Michelle has submitted this synopsis of her book that will give you a little background about this amazing woman from history.  After reading the excerpt see the contest details. With eager anticipation I can't wait for my copy to arrive.   Congratulations Michelle!

MADAME TUSSAUD: The Woman
When most people hear the name Madame Tussaud, the first thing that comes to mind are the eerily lifelike waxworks which crowd her museums throughout the world. But who was the woman behind the name, and what was she like in the flesh?
Madame Tussaud’s story actually began in 18th century Paris. While most people know her from her famous museum in London, it was in France, on the humble Boulevard du Temple, where Marie first got her start as an apprentice in her uncle’s wax museum, the Salon de Cire. At the time, the Boulevard du Temple was crowded with exhibits of every kind. For just a few sous a passerby might attend the opera, watch a puppet show, or visit Henri Charles’ mystifying exhibition The Invisible Girl. The Boulevard was a difficult place to distinguish yourself as an artist, but as Marie’s talent grew for both sculpting and public relations, the Salon de Cire became one of the most popular attractions around. Suddenly, no one could compete with Marie or her uncle for ingenious publicity stunts, and when the royal family supposedly visited their museum, this only solidified what most showmen in Paris already knew — the Salon was an exhibition to watch out for.
But as the Salon’s popularity grew, so did the unusual requests. Noblemen came asking for wax sculptures of their mistresses, women wanted models of their newborn infants, and – most importantly – the king’s sister herself wanted Marie to come to Versailles to be her wax tutor. While this was, in many ways, a dream come true for Marie, it was also a dangerous time to be associated with the royal family. Men like Robespierre, Marat, and Desmoulins were meeting at Marie’s house to discuss the future of the monarchy, and when the Revolution began, Marie found herself in a precarious position. Ultimately, she was given a choice by France’s new leaders: to preserve the famous victims of Madame Guillotine in wax, or be guillotined herself.
Madame Tussaud: A Novel of the French Revolution is the story of Marie’s life during one of the most tumultuous times in human history. Her survival was nothing less than astonishing, and how she survived makes for what I hope is a compelling read.~ Michelle Moran
Visit MichelleMoran.com
Check out Michelle's blog at michellemoran.blogspot.com
Contest Giveaway from January 21st-February 21, 2011

Prize:
A  copy of Madame Tussaud signed by Michelle Moran and a pair of cupcake earrings. 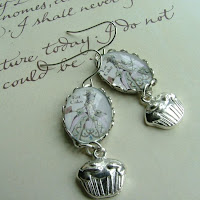 Disclosure: All book copies for review, and earrings for this giveaway are free copies sent by Crown Publishing.  Any review or guest post is submitted without monetary compensation with my opinion written and posted free from bias.

I always thought of the museum, I never thought of the woman behind it. I think this sounds like a really good story. It would have been very difficult to be in her shoes.
I am a gfc follower.
debbie
twoofakind12@yahoo.com

I follow. The excerpt sounds fascinating. I too have always wondered how that all got started!


I have read a lot about this amazing woman beyond her times in review.I am so glad that the author wrote this book. Can hardly wait to read it.

I tweeted. My Twitter name is Carolee888.
http://bookwormsdinner.blogspot.com/2011/01/michelle-morans-madame-tussaud-book.html? Giveaway for 'Madame Tussade' book

I would really love to win this book. I have read so many reviews of this book. Madame Tussaud was unusual in her intelligence, skill and indepence for the time period.

I have been anticipating the release of this book since I first heard about it last summer. I think Tussaud's story is very compelling. I can't imagine being forced to render the death masks of these famous guillotine victims but I had no idea that revolutionary leaders were meeting at her house. This only adds another interesting aspect about Tussaud's life that I am excited to read about.

Yes, most people including me think of the museum and not the person behind it. When I was little we went to England to visit my grandparents and this was one of the places I wanted to visit most. It's interesting to learn how she got her start.
seknobloch(at)Gmail(dot)com

I learned some interesting things here about the real Madame Tussaud -what a fascinating woman! I love Michelle Moran's books -I got introduced with Cleopatra's Daughter, and have since read them all. One of the most talented historical fiction writers out there...

I read this book and really enjoyed it, I won an ARC on Goodreads. lisapeters at yahoo dot com

I am a GFC follower (Colleen Turner). This book sounds just fascinating to me! I have seen it on many blogs and cannot wait to get my hands on it. Like so many, I have only associated the name Madame Tussaud with the wax museum. I had no idea she was so involved in the politics of France and cannot wait to see what else I don't know about her :).
Thanks,
candc320@gmail.com

I had no idea that her job was so dangerous. Threats to do the job or face being guillotined, wow.

I signed up with GFC as a follower but it doesn't seem to be working.

Crap, forgot my comment, I was too excited for this lol. So I absolutely love historical fiction. This one has the added benefit of returning to the present as well. The excerpt made me anticipate this even more.
GFC follower

I'm a follower and I adore this author. I would love to be entered! Nefertiti was one of my favorite things I read in 2009.

I think Madame Tussaud sounds fascinating and I would love to read more about her life. She was so talented and her life was under threat too. Thank you for the giveaway!
k_anon[at]hotmail[dot]co[dot]uk

Michelle Moran's writing is wonderful. I especially loved The Heretic Queen, and am sure that Michelle will integrate wonderful elements into Madame Tussaud.

I would love to win this book! I've always found the Reign of Terror fascinating and interesting history. Thank you for the opportunity!

GFC follower
Love this period of history. Sounds like a great book. I don't know that much about her; always just think of the museum when i hear Madame Tussuad.
tweeted ~ http://twitter.com/#!/pixie13sweeps/status/39337728332148736