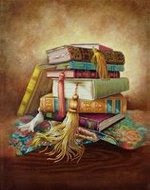 Lesa at Lesa's Book Critiques just awarded me The Bookworm's Award. Thank you!

Thank you Lesa for sending this surprising Meme to me along with the Bookworm Award. Of course I will participate. What fun to enjoy in the middle of the week.

Along with the award, there are a few rules. Open the closest book to you-not your favorite or most intellectual book, but the book closest to you at the moment-to page 56. Write out the fifth sentence as well as the next two to five sentences. Pass this on to five blogging friends.

The book closest to me is The King's Daughter by Sandra Worth. I will be reviewing this book in the next couple of weeks having received an ARC from the author. Thank you Sandra. Page 56, the fifth sentence begins:

I dimly remembered a man who was unkempt and frightening, for he had worn a bloody apron then. But the old man who stood before us bore no resemblance to my childhood memory. He was dressed most elegantly in a black velvet cap set with a jeweled brooch, an attire of rich green silk and camlet, and a black mantle edged with beaver trim over which was hung a massive gold chain.

"Your Grace," he said, flourishing a deep bow, "I am sore distressed to find you in sanctuary once more."

"John Gould," my mother said, offering her hand, which he kissed.

The King's Daughter is a novel about the first Tudor Queen, Elizabeth of York, also known as the people's queen, "Elizabeth the Good." This passage selected by chance from the designated page 56 requirement for this Meme, describes in colorful vivid detail the character of John Gould. This is just one excellent example of how her rich imagery places us in the same room and time period in history. Just a little bit of a tease while you await my review of The King's Daughter a page turning historical novel from this passionate period of Tudor England.

So, I'm passing on the award to five people. Tag, you're it! And, if you're not into memes, here's my apology. Remember, you never have to pass one on, if you don't want to play.

Ruth at Bookish Ruth
Marie at Boston Bibliophile
Jen at Devourer of Books
Iliana at bookgirl's nightstand
Maggie at Maggie Reads
Posted by wisteria on 11/19/2008 09:31:00 PM

Thanks for tagging me! This one is going to be fun. :)

The King's Daughter sounds interesting :) I enjoy reading about the Tudors.