That Book Woman by Heather Henson 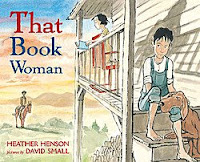 Heather Henson and David Small collaborate with great success as if they have been a team for years. I thought That Book Woman was an unforgettable historical fiction delight. The author captures the history of FDR’s WPA projects of the 1930s. There was a group known as the Pack Horse Librarians who lived in the Kentucky mountains. These were mostly woman who stepped out of their traditional roles and saddled up to deliver books; becoming a traveling bookmobile on horseback. They were tenacious in their willingness to travel over rough terrain and wild weather to get books to people.

This story is about one such librarian who travels to homes in the rural Appalachian mountains to bring books to people who would otherwise not have any. Lark is a little girl who loves to read. Her brother Cal is the direct opposite and thinks the librarian on horseback is just a bit strange. Week after week she brings books to Lark, but Cal doesn't see the point. Cal respects her tiresome ride and one day his opinion of reading books changes. It is a story you won't want to miss.

Henson makes her writing look simple when in fact it is royally rich on every page. Your senses become acutely aroused with the careful imagery, simile and metaphor. You know exactly what Henson means when she writes “stoney still”, “dusky dark” and “red as clay”.

David Small, an experienced illustrator has won a Caldecott Award for illustrating So You Want to Be President? by Judith St. George and a Caldecott Honor Award. He uses ink, watercolor and pastel chalk to create the subtle soft colorful setting of a quiet slow paced time period, when life was less hurried. He evokes a pastoral image that enhances Henson’s text, each a complement of the other.

To appreciate the charming poetic prose of this book consider this as a read-a-load. Strongly recommended for all libraries as a first choice on their next list.
Posted by wisteria on 11/14/2008 11:24:00 PM