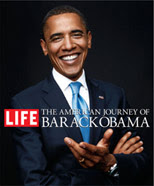 With grateful thanks to Hachette Book Group, I am hosting a book giveaway. The winner will receive a copy of THE AMERICAN JOURNEY OF BARACK OBAMA by The Editors of LIFE Magazine. History was made on November 4th this year with the election of our first African American President. On January 20th, Barack Obama will take the oath of office and become the 44th President to the US.

According to the publisher,

The American Journey of Barack Obama covers the candidate from his childhood and adolescence to his time as editor of The Harvard Law Review and his Chicago activist years, culminating with the excitement and fervor of the historic 2008 Democratic National Convention. The unfolding drama of Obama's life and political career is cinematic in scope, and never has it been presented so compellingly.

In addition to a powerful array of photographs that were taken by many of the country's greatest photographers (and some that were snapped, in the quiet moments, by Obama family members themselves), this book also includes a Foreword by Senator Edward M. Kennedy, an incisive narrative biography and original essays by some of our finest writers, including Gay Talese, Charles Johnson, Melissa Fay Greene, Andrei Codrescu, Fay Weldon, Richard Norton Smith, Bob Greene and several others. Many readers will find a new understanding of Obama. All readers will feel that they are bearing witness to a singular, undeniably American story.

To celebrate this history making event, anyone who leaves a comment on this blog post dated today, November 18th will receive one entry. You will receive another entry for each subsequent comment you leave when I write a new posting. For example: Leaving a comment today is one entry. If I write three posts between now and December 4th and you comment on all three, that would be a total of four entries. Good luck to everyone.

For this post what are your thoughts about the election? What would you like to say to Barack Obama? What are your hopes for his administration?
How do you think your life will change? What is your vision for the next few years?
I'd love to know what you think about the election, and the impact on the US. What would you like to know about President Elect Obama from the book?
Posted by wisteria on 11/18/2008 06:12:00 PM

Oh man, I would LOVE this book.

If I could tell Barack one thing, it would be to simply follow his values and do his best, not to worry about expectations (was that really just one thing?). I keep hearing stories about people saying "now everyone will have a job," basically expecting puppy dogs and rainbows. I'm super excited about this election, though, and I'd love to commemorate it with this book.

Jen...how eloquently said. I'm also very excited about this election and know he has a lot on the agenda.

Thanks for your comments and good luck.

My thoughts are that this election means a lot of change for America. Whether that change is ultimately in our best interest or not, remains to be seen. I just checked out The Audacity of Hope from the library, mostly because I'd like to read his own words and not twisted excerpts from the extremely biased media and emails from angry conservatives. I did not vote for Obama and the next few years will prove interesting as I watch to see if he gains my respect or not.

I did blog this too: http://2kidsandtiredbooks.blogspot.com/2008/11/giveaways_19.html

Hi Holly, I plan on reading Audacity of Hope also. I really want to hear his words. I have such hope for change and just read today about his plan for creating jobs. This includes upgrading schools. Speaking as a teacher with occupational allergies, this is long long overdue. There are so many sick buildings in our system of education.

Your so right about the twisted excerpts of the biased media. It's unfortunate that some people are unable to discern that they are snippets of convenient fodder to create market share.

Thanks for your comments.