My trip to Gettysburg...
PERSPECTIVE is the word I kept hearing over and over again in my head. How do you equate or fathom the staggering numbers of the killed, wounded, missing and captured soldiers that were lost in three days of intense horrific and ghastly fighting. Hand to hand and close range fighting were the norm. The numbers of statistical casualties would roll off the tongue of our brilliant tour guide.

To be a guide in Gettysburg you have to pass a rigorous test. Out of 300 examinees, five passed the test and our leader was one of them. It is an awesome responsibility and not one the Gettysburg National Museum and Preservation Society takes lightly.

PERSPECTIVE is hard to grasp as you view the panoramic beauty of America's landscape. How can one envision the sight of bodies three deep, so many wounded that most would die on the field anyway? So many bodies that their were not enough people in the town to bury them. They say approximately 800 bodies are still buried beneath the rolling farmland of Gettysburg. Their tomb is where they fell for now undiscovered or marked. Scattered monuments pepper the countryside, tributes to the soldiers Confederate and Union who fought and died those three days. 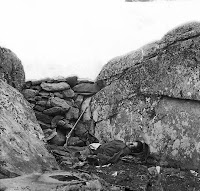 Devil's Den, a collection of huge boulders is a famous backdrop of old Civil War photos and is instantly recognizable. This photo taken by Alexander Gardner of a Confederate Soldier. In my movie you will see the same shot missing the soldier. The spot is identical and has remained preserved since 1863.

I was unprepared for the intense emotion I would feel as I walked the battleground sites on the second day. I stood there and closed my eyes and trid to picture the explosion of sound. Canons that were capable of firing 2 to 3 times per minute. I tried to visualize that six horses were needed to pull each canon. One in three men were shot, killed or wounded. This was a blood bath of complete carnage. Officers fought and died along side the men they commanded. PERSPECTIVE.

The countryside as a battlefield crawling with infantrymen, artillery, horses is such a contrast to what you see. Closing your eyes and reading books, hearing the tour guide and a vivid imagination still can't capture the fierce, chaotic drama of the three days. I was entranced much of the time. I tried visualization and comparison.

I visited the Gettysburg Museum which contains prodigious exhibits, video clips and lessons. I found the museum overdone and overwhelming. There was no space on any wall leading to a profusion of media that lost it's message. If you visit the museum plan to do this as a one day event, not as an add on after any tour. It will tire you out.

I am so glad I was able to go on this trip sponsored by a grant that Danbury won called, Teaching American History (TAH). I don't know if I conveyed the serenity and solemnity of Gettysburg, but it is there.

Another aspect of Gettysburg that has touched all our national venues is commercialism.
Visit the downtown and of course there are all sorts of shops and numerous
stops and restaurants catering to the tourists. One interesting event that has drawn visitors to Gettysburg out at night is the ubiquitous Ghost Tours. Led by a guide with a lantern, your group is led to any number of venues with hopes of seeing one of the many ghosts that have been thought to reside or have been known to appear. I did not want to participate in this or any tour of the commercial shops downtown. However, I did purchase a number of books at the Gettysburg Museum Bookstore. Surprised? Neither am I! I will share them with you and talk about the bookstore another time.

If you have never been to this historic Civil War battle site, you really must try to plan a trip there sometime. Read as much as you can before you go to gain PERSPECTIVE.

Gettysburg is amazing. It's been 27 years since I visited it, but the impressions have always stayed with me. Thank you for sharing!

What a wonderful post, Donna! Both my husband and I would like to visit Gettysburg someday. From what you said, it's not only rich in history but atmosphere as well.

I haven't been to Gettysburg, but I can see how much the visit impressed upon you. The guide requirements are rigid, but I'm sure they know their material and are prepared for most any question.