Mailbox Monday is hosted by Marcia at The Printed Page. Mailbox Monday is the gathering place for readers to share the books that came into their house last week (checked out library books don’t count, eBooks & audio books do). Warning: Mailbox Monday can lead to envy, toppling TBR piles and humongous wish lists. 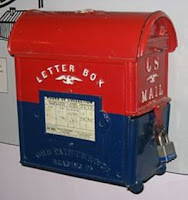 Lots of reading for my summer off....this is my idea of vacation. :) 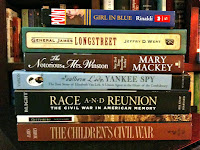 Purchased at the Gettysbury National Bookstore 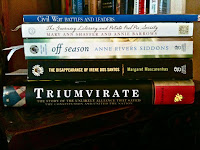 
Triumvirate, by Bruce Chadwick
From the News Release:

They were simply known by the common Latin phrase Publius, meaning "to proclaim" or "to bring before the public"-James Madison, who would become the fourth President of the United States; John Jay, who would be appointed the first Chief Justice of the U.S. Supreme Court; and Alexander Hamilton, who would go on to become the young nation's first Secretary of the Treasury.

In his new book, Triumvirate: The Story of the Unlikely Alliance Tat Saved the Constitution and United the Nation author Bruce Chadwick brings alive the dramatic story of how the trio convinced a weak alliance of thirteen independent-minded states to join together and create a united country.

Those all look good, Donna. I hope you enjoy them! :-)

I just loved The Guernsey Literary and Potato Peel society. It is such a shame the author never got to see how popular her book would be.

The Guernsey Literary and Potato Peel Pie Society, I absolutely loved this book, have fun :D

Love the letterbox! Enjoy your books!

LF---Thanks, hope so too.
Scrap Girl: I've been waiting to read Potato Peel and I know it is a shame about the author.
Blodeuedd: So glad you liked it. I'm reading it next.
Avisannschild: Isn't it cute. I wish I had one.
LOL

Wow, what a haul! I read "Shades of Gray" over the weekend (review is up on my blog). LOVED it! I recommend it, especially for a Civil War buff - which, I'm just going out on a limb here, you seem to be :)

Wow, all these books sound good. I can't wait for some reviews to start rolling in. Enjoy!

Mary.....I read one of the first copies of Shades of Gray. It was one of my first blog reviews. It is also one of my favorite books.

I have become friends with Jessica James, who is
is a fabulous writer. Didn't you just love the dialogue with her characters.
I could read this book again. I already read it twice. I wish more people would read this book.

Dar....They're coming...some are for papers I have to do too.

Great books you've got there!

I've bought The Guernsey Literary and Potato Peel Pie Society during the weekend. :)

Those Gettysburg purchases look good. I don't think I would be able to read them all together though - I would need to intersperse others between them. I have The Disappearance...Santos in my pile to read. Glad to hear you liked it!

Looking forward to your thoughts on the Guernsey book. I really enjoyed it.

Alice and Anna...
Started reading Guernsey book today...can't put it down. Seriously...loving it!!

Kristi...I don't read them all in a row. That would even overload my tolerance. I read several books at a time. But, I am a bit obsessed with Civil War history at the moment. Not always. LOL