Mailbox Monday is hosted by Marcia at The Printed Page. Here is what it is all about.

Mailbox Monday is the gathering place for readers to share the books that came into their house last week (checked out library books don’t count, eBooks & audio books do). Warning: Mailbox Monday can lead to envy, toppling TBR piles and humongous wish lists. 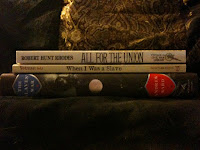 RECEIVED VIA BACK POCKET MONEY :)
When I Was a Slave: Memoirs from the Slave Narrative Collection
Edited by Norman R. Yetman


From the jacket flap:

Thirty-four gripping testimonies are included, with all slave occupations represented-from field hand and cook to French tutor and seamstress. Personal treatment reported by these individuals also encompassed a wide range-from the most harsh and exploitive to living and working conditions that werre intimate and benevolent.

All for the Union, The Civil War Diary and Letters of Elisha Hunt Rhodes
edited by Robert Hunt Rhodes

All for the Union is the eloquent and moving diary of Elisha Hunt Rhodes, who enlisted into the Union Army as a private in 1861 and left it four years later as a 23 year-old lieutenant colonel after fighting hard and honorably in battles from Bull Runn to Appomattox. (excerpted on the PBS-TV series The Civil War.

The Slaves' War by Andrew Ward
"This is a riveting book" quote by Ken Burns.

...here is the Civil War as seen from not only battlefields, capitals, and camps, but also slave quarters, kitchens, roadsides, farms, towns, and swamps. Speaking in a quintessentially American language of wit, candor, and biblical power, army cooks and launderers, runaways, teamsters, and gravediggers bring the war to vivid life.

In 1853, Carolyn Vinton is left alone and pregnant when her fiancé, abolitionist Dr. William Saylor, disappears. Grieving and desperate, Carrie is easy prey for William's stepbrother, Deacon Presgrove, who convinces her that William is dead-and offers to marry her to give her baby a father.


From the jacket flap:
He was mocked and called misala-crazy. But young William Kamkwamba struggled against the odds to fulfill a dream that would change his life in Malawi, a famine-stricken, landlocked nation on the southeastern tip of Africa. With the help of his best friend and the support of his father, William forged a handmade contraption that created ..."electric wind"..." "William has become a worldwide sensation, offereing hope, opportunity, and inspiration to millions everywhere."

From the jacket flap:
....the spellbinding story of Warren Harlan Pease, a young US Army sniper freshly returned from the Iraq War to his native New Hampshire. What follows is a page-turning adventure that is also a powerful and poetic meditation on religion and war, love and loss."

Hope you enjoy your week. I also went on a spending spree thanks to the BEA event I read about on The Devourer of Books blog. Thanks Jen...I spent oodles. I'll post some pictures tomorrow. LOL I must be nuts.
Posted by wisteria on 7/13/2009 07:41:00 AM

You have some fabulous books there today. I keep seeing The Boy Who Harnessed The Wind - shall definitely look it up.

South of Broad is making the rounds, it seems. I just know it will be good. Pat Conroy knows how to get the reader immersed in his characters. Have a great week and happy reading. My MM is here

Some great books in there, i hope you will enjoy them.
I am very curious about the Mckey book

Like the idea of reading The Host together. Wouldn't be able to start till after school breaks up which is next Wednesday. Let me know what you think and when your available. Perhaps we can see if anyone else wants to join us.

Can't wait to hear more about "When I Was A Slave"!

These all sound interesting. Happy reading!

Nice amount of books :) I have the boy who harnessed the wind too.

wow wisteria, great books in the mail! The Widow's War sounds really good. And I look forward to your review of When I Was a Slave.
http://thebookworm07.blogspot.com/

When I Was a Slave reminds me of a book I have on my tbr pile: Bullwhip Days - The Slaves Remember. It's also a collection of testimonies, and I really need to get around to it.

Looks like you have some good reading ahead of you, Donna. I'll be curious to read what you think of each of them.

The Widow's War really does look good! Can't wait to hear what you think of it.