It's been a busy weekend and I didn't think I would post at all, but I felt like something was missing in my life. My nephew got married last night and I spent the day with him yesterday, running around doing last minute things. We went shopping and had to pick up flowers. It was really fun though spending a few hours with my oldest nephew. I went to his rehearsal dinner on Friday night at his house. He has spent three years or so remodeling the place and it was great to see all his finished work. It really came out nice and he is so meticulous with his craftsmanship. 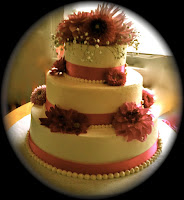 Speaking of talent,
my sister,(remember who just passed her RN test) spent the last two days making her son and daughter-in-law's wedding cake. Check this awesome cake out. She made a couple of test cakes for the bride and groom to try, but she also made a mini for me. Yummy!! It was a dense, moist chocolate cake with an incredibly delicious ganache filling iced with the most lip smacking buttercream frosting. Don't you just wish you could taste it?

Of course, I did read this week and so that this is truly a Sunday Salon, I will recap some thoughts.

I had a hard time deciding what to read and found myself flipping through the first through chapters of one book. Then I would put it aside and pick up another one. Still not satisfied I started reading a third, then a fourth and I am so confused right now that I stopped reading all together. Has that ever happened to you?

I did finally try another book. A completely different one called Half Moon by Douglas Hunter. This is the story about Henry Hudson. So far I really like it, but as with the other books, I have only read two chapters. I can't believe my indecisiveness this week. All the books I started are good, I liked them and I will read them I don't know why I was having so much trouble deciding what to read.

Has this ever happened to you? I think it was Alyce who asked me, How do you decide what to read? Did I get jinxed? Just kidding, Alyce. Maybe it was just nervous sympathy for my sister as she was whipping up her masterpiece for the wedding.

I hope this week is better. Don't forget the contest for the Karen Rose book I have going. Also...see the contest over at Naida's the bookworm. Both contest links are in my sidebar. Have a great week.

The cake looks absolutely gorgeous and delicious! Lucky you for getting a mini cake to try.

I hope that you find a good book that you can lose yourself completely in!

I've been in the middle of reading malaise lately, too. I keep jumping from book to book unable to settle on anything. I'm so tempted to have someone just pick something out of the pile for me because I just can't seem to make a decision!

Same thing for me this week, started a book, really good, but nope just couldn't decide on what to read.

That cake looks too good to even eat

Yum, cake! I'm planning on baking wedding cupcakes for my own special day, actually. I'm glad your sister's turned out so well!

I hope you can settle down with a good book soon.

What a creative looking cake, and how fun that you got a mini-version!

Same problem for me with the picking up and putting down of potential books. Must be something in the air!

I do that all the time with books. My mood turns really grey if I don't have a book to read, but it gets even worse if I pick up a book and then realise it's not what I want to read. If it happens a second or a third time then my mood is completely shot and I usually cannot read. It isn't just you!

(also, word verification: mychele So similar to my name. I'm such a dork that that makes me happy)

The cake is beautiful and it sounds so yummy! I've got a few books started right now. I'm waiting for one to grab me and not let go. I just finished a few good ones and that's the problem I think. I got spoiled. lol.

That cake made my tummy growl. It looks fantabulous!

And I tend to be a moody reader, so I've had more than a few moments like that. In fact, had one last night when I finished my last book and needed something else to sink my teeth into. I decided to just take a breather. LOL

Best wishes to the newlyweds for a lifetime of happiness!

Your sister is quite the talent with that cake - I could practically taste it with your description!

Congratulations to your nephew! That's a beautiful (and yummy looking) cake.

That is a beautiful cake!

I know what you mean, sometimes I cant make up my mind either on what I'd like to read next.
http://thebookworm07.blogspot.com/